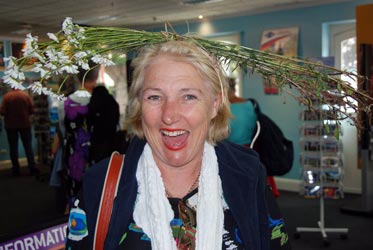 BACKGROUND:
On 19th Jan 2013 the father & daughter team of Rohan and Brooke Levy were travelling in Tasmania and arrived in Salamanca market (Hobart) on a sunny day. Together with a friend (Yarden) they were met by a young woman who gifted them with a plain but beautiful bunch of long stemmed daisies, which surprised them with delight. After a long walk through the market, they looked for a resting place and found the head of statue (seal) to lay the flowers. It looked funny. Rohan smiled and took a photo. He put the flowers on Brooke’s head, she smiled and he took a photo. “Why stop there?”, was the obvious question. Rohan approached a complete stranger and politely asked - “Excuse me, but do you mind if I put these flowers on your head?” The lady agreed, he put the flowers on her head, she smiled and Rohan took a photo of her. As crazy as it sounds, the rest of the day was spent greeting random strangers in the street and taking photos of them, with their permission - after flowers on their heads! That day they "flowered" over 280 people! But why? It became contagious. The more these strangers smiled, the more it made both Brooke and Rohan smile. It felt amazing to put a smile on the face of a complete stranger. 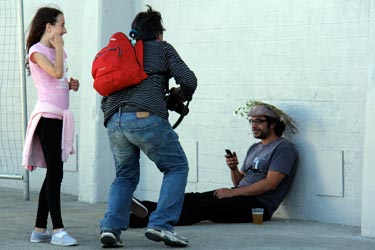 Together they managed to disarm a variety of individuals; extracting and capturing a pure sense of joy within a few moments. They were making a difference to others' days. As they continued, people asked "What's this for?". Thinking on his feet, Rohan blurted - "It's National Flower Day!" "Really?", was the most common response. To which, "Well, we just made it up actually." was the reply. Both Brooke and Rohan were glowing after their day of fun. "We have to do this again! Let's do it again next year!" Then it turned into a challenge..."Let's see if we can find 100 people from around the world to do it on the same day at the same time!" they agreed. And so this special father/daughter project began. On reflecting on their day and all that had transpired, a number of things became clear to them: Gratitude is the key that opens the door to happiness, A random act of kindness makes a difference. Random acts of kindness can make a big difference. It's so easy to make a difference to a person's day, whether it is a friend, family member or even a complete stranger in the street. Stop and smell the roses…No! Stop and smell the flowers! With a dried up bunch of simple daisies a difference was certainly made. There's a great need to be mindful of the many things in our lives that we can be grateful for, not just the roses. Society is disconnecting. We have iPhone, iPad and iPods, but we are missing genuine contact – (eye) iContact. We are so wrapped up in technology that direct communication is now often avoided. There is a day put aside for expressing thanks to the mothers of this world. There is a day made for expressing love to your sweetheart. Why hasn't there been a day put aside to show gratitude for family, friend, loved ones and even strangers in the street, just because…? There was no International Flower Day…until now…Voila!